Among the Dead, a Revelation: Why Business Executives Need to Tell Their Story 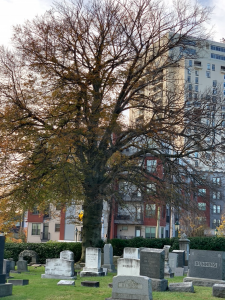 That line came to mind during a recent walk through, of all places, a cemetery. No, I don’t see dead people, but what I do see are stories. I view everything I see or hear through the prism of one question: Would it make a great story?

And it was among the dead in Prospect Hill Cemetery in Towson on a crisp windy day that this revelation hit home. What I concluded during that walk with PHC executives and guides Carolyn Knott and Ginger Galvez was that even this 129-year-old year cemetery was a great story that had to be told. Here is the rationale:

It is hard to sleep at night when so many exciting elements come together in a single story. So, we told our tale and witnessed results: positive news coverage in The Sun, TV and other media, a gathering with local politicians, residents and board members, donations, visibility and a dedication from County Executive Johnny O – “Historic Prospect Hill Cemetery Week.”

Nick Morgan, author of Power Cues, got it right when he told the Harvard Business Review in a 2014 interview that business executives “won’t be heard unless they’re telling stories.”

Stories, he said, create “’sticky’ memories by attaching emotions to things that happen.”

It is true, businesses all too often ignore the power of story. Most don’t even know they have stories that are waiting to be told. Telling your story can drive reputation, bring in clients, attract talent, increase clicks to your blog or website, and in some cases, spur positive change.

So, tell your story … before it is too late.