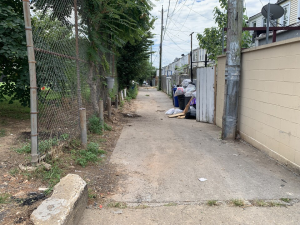 The alley behind North Curley Street in east Baltimore is no joke. Shattered glass, rusty screws, trash, bottles, cans, a mattress. And then the gore: a couple of dead rats, a cat that is stiff as a board on its back, and a lop eared black and white rabbit – once no doubt a household pet – all in a state of decomposition and reek.

Suddenly, two young children emerge to see a group of strangers picking up trash. I am part of the detail along with friends at Helping Up Mission and Banner Neighborhoods where I am on the board. I stop and talk to the kids, a little girl in bare feet about four years old cradling a doll that someone has marked up with a black marker. The doll boasts a mustache, goatee, glasses and underwear. It looks nothing like a doll but strangely a cute miniature man. The little girl is with her brother about six and we start to chat. An older brother appears in a powdered blue Air Jordan shirt and shorts. He is about eight and he is walking slowly because he has slipped his small feet into his dad’s black dress shoes that are 10 times too big.

A few feet down the cops have arrested a young man who is in cuffs, agitated and speaking Spanish. While the drama plays out, I talk with the kids who are curious and have plenty to say. They tell me about their friend, Jose, who just threw up in the alley. I make sure not to step in the vomit.

“Jose is by himself,” says the oldest boy. “His mom has to work. Oh, his sister is with him.”

This is part of Banner Neighborhood’s community. For 40 years Banner has been providing kids with sporting programs like soccer, track and basketball as well as job readiness. It also helps elderly residents age in their homes by fixing problems that arise. Maybe a water heater is broken or a banister is loose or a smoke alarm needs a new battery. In spite of the odds, Banner is making a difference offering programs for hundreds of kids. It is a haven for physical, emotional and personal growth. It helps stabilize the neighborhood by providing opportunities.

We are raising money for Banner’s 40th anniversary and holding a neighborhood party on Aug. 20. Our goal is to raise $50,000. We’ve collected about $18,000 so far. Of course, we need support. Watch this video to learn more about Banner and visit this URL to donate: bannerneighborhoods.org/

I wonder about the three little ones. North Curley Street is a tough place to grow up. The drug trade is brisk. But the young ones I met were engaging, bright and innocent. The oldest boy follows me and wants to give me something, it is a screwdriver he had picked up. He wanted to help be part of the cleanup. Banner will certainly be able to provide him with more opportunities to help make his neighborhood a great place to grow up.

Side note: Separating recycling from garbage is surprisingly satisfying 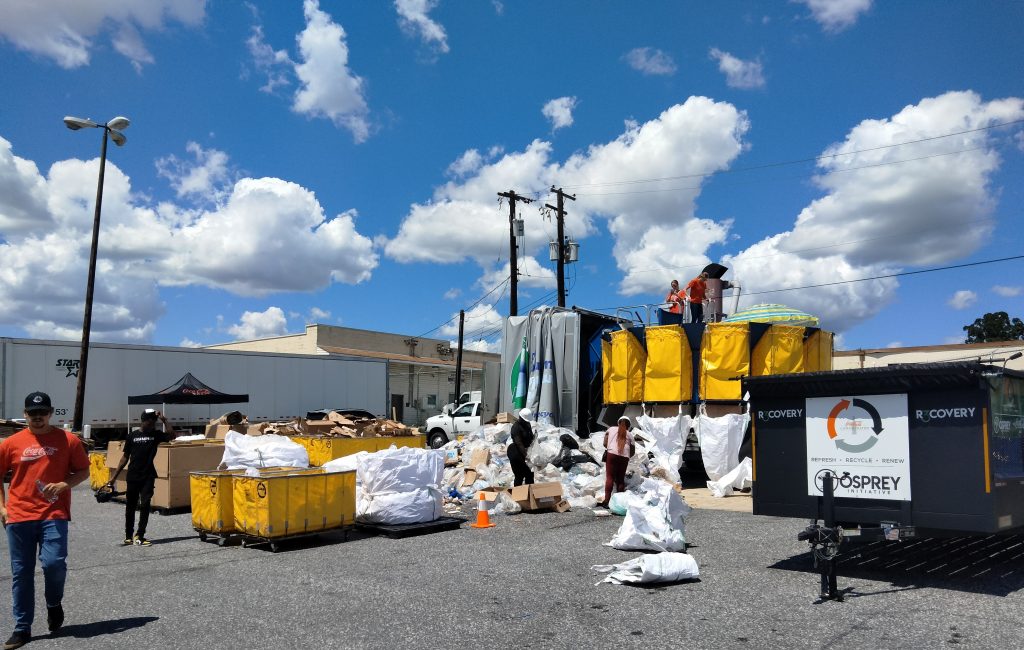